1926, in Paris. Samuel Schwarzbard murdered Petlioura, the Ukrainian military officer and politician responsible for the pogroms that killed tens of thousands of Jews between 1919 and 1920. The affair, now forgotten, had a huge echo in France at the time. Indirectly, it was also at the origin of the creation of the current LICRA, one of France major antiracist organization. Philosopher Elisabeth de Fontenay revisits the story of a man who, before the Shoah, wanted to avenge the murdered Jews, and whose gesture was the origin of a desire for Jewish self-defense in the four corners of Europe.

« If one is attacked as a Jew, one must defend oneself as a Jew. » Hannah Arendt

Paris, rue Racine, near boulevard Saint Michel, May 25, 1926, at 2:15 p.m., a craftsman in a white coat calls out to a passer-by whom he had been waiting for a year, asking him twice if he is Petlioura. He then shouts, “Murderer! This is for the massacres, this is for the pogroms!”, and shoots five times at the man, who has turned to face him. He turns himself over immediately to the police, declaring: “I killed a murderer.”

The man was tried in October 1927. His attorney Henri Torres presented three accounts of the deceased individual’s atrocities, the number that the tribunal’s chief judge had asked for[1]. But Torres had more than 80 potential witnesses from Russia and Ukraine to call on. Torres’ defense convinced the jury, who voted unanimously to acquit the assailant. Innocent and murderer, he was named Schwartzbard, Samuel Schwartzbard[2]. But he went by the diminutive of Scholem, which is how his attorney referred to him. He was born in 1888 in Izmail, and grew up in Balta, the Ukrainian town where several pogroms took place in 1882, 1905, 1917, and finally, in 1919; this last time it was Petlioura who orchestrated the violence against Jews.

“I have opened,” he wrote, “a new chapter in our dark and bloody age-old story: enough slavery, enough shedding of tears, let us cease to implore, to cry, to suborn!” This assassination was indeed an act of vigilantism; Schwartzbard was overcome by the victimization of his people. But this was also a call for emancipation and a publicity stunt. Scholem Schwartzbard had decided, with dramatic flair, to show France, the cradle of human rights, how the troops commanded by Ataman[3]General Petliura, “chief executioner or chief of executioners,”[4] under the guise of defending Ukrainian independence against the Soviet armies, had tortured, raped and killed nearly 100,000 Jews. Petliura and his Ukrainian National Army were responsible for dozens of organized massacres of Jews. Orinin, five people murdered; Brazlav, 82 people; Odorkhov, 700 killed and 800 wounded, the pogrom having lasted twelve hours; Proskourov under the command of Ataman Semessenko, assisted by the brigade of Zaporogues Cossacks commanded by Ataman Petliura, without counting the massacres perpetrated by his generals. The more the Ukrainian armies fighting against the Bolsheviks were defeated, the more Petliura’s men took revenge on the Jews. During 1919-20, up to 905  “pogromized” localities were counted…

“In December 1925,” Schwartzbard declared at his trial, “I learned from a friend that two officers of the White Army had boasted, one of them of having subjected thirty-seven Jewish women to the greatest outrages, and the other of having killed fifteen Jews with a sword in the same day (…) A few days later, I learned that the former ataman Petlioura was in Paris, so I went in search of him.”[5] The author of this act of vengeance claimed to be a Zionist, anarchist and French at the same time. Today, we find this difficult to understand because we forget that libertarian Zionism, theorized by Bernard Lazare, an anarchist and the first Dreyfusard, did not advocate the idea of a Jewish state, but that of a Jewish nation. After wandering through Central Europe, Schwartzbard joined France’s Foreign Legion in 1914, took part in the fighting on the Somme and was then incorporated into a line infantry regiment. Badly wounded at Verdun, he was cited in the order of the day and decorated with the War Cross. He was discharged in 1917. He left us with a detailed and lucid account of those years. And without a doubt, his status as serviceman and wounded soldier counted a lot for the jurors who acquitted him.

After the war’s end, Schwartzbard returned to Russia, where he stayed until 1920. According to his account, he helped the Bolsheviks wrest Odessa from anti-revolutionary forces, as well as requisitioning housing and food for destitute children and families caught in the middle of the conflict. He was a direct witness to several of the pogroms of the terrible year 1919, during which fifteen members of his family were murdered by the haidamaks, these militias composed of Cossacks and Ukrainian peasants, commanded by the ataman. Back in France, in 1920, he settled in Paris where he worked as a watchmaker on the boulevard de Ménilmontant. There he is in a peaceful photo alongside wife Anna and dog César, the three posing in front of his store. But, despite his naturalization in 1925, he could not be “happy like God in France.” He could not forget the gruesome fate of his family in Ukraine. This is why, in a stark and theatrical gesture, he would unfurl the flag of resistance, a response to the crimes of some and the indifference of many. Petliura, as president of the Ukraine Directory, commander of troops and a notorious pogromist, was seen as an emblematic figure of anti-Jewish violence. He had not ceased his activities once in exile in France, publishing the nationalist and antisemitic journal Le Trident.

An insidious campaign tried from the beginning to persuade democrats that Petliura was the victim of a terrible injustice, that he was in fact a philosemite, as he would have proved by appointing a Jew as a member of his board, and that, moreover, he was planning to emancipate later those whom the tsars had forced to live in the Pale of Settlement. This campaign has taken an official turn since the Ukrainian government erected a monument in 2006 to a man considered by many of his compatriots as a hero of national independence slain by Communists.. With the blessing of the French authorities, a scandalous ceremony of homage, from which journalists were excluded, took place in May 2006 at the tomb of the Unknown Soldier to honor the eightieth anniversary of the death of the pogromist.

The Ukrainians continue to suggest that Schwartzbard belonged to the Bolshevik secret service and that he acted on orders. Many French Jews, and not only the dignitaries of officialdom, were not insensitive to the anti-Communist frenzy which attributed the assassination of Petliura to an order from Moscow and thus robbed the modest Jewish and libertarian craftsman of its authorship. No one will deny that Schwartzbard was, in his Russian years, an anarchist and a communist. He never hid this fact, but his autobiographical writings are undoubtedly selective. It seems that in August 1917, on the French boat that took him to Russia, he was arrested for Communist agitation and handed over to the tsarist authorities in Arkhangelsk. He then managed to reach Petrograd, where he served in the Red Guard and then in a special battalion of the Cheka, sent to Ukraine. In 1919, he commanded a special Jewish cavalry brigade of 90 men under the orders of a communist leader.

And he was no angel in his youth. He had taken part in the Russian revolution of 1905, and in 1909, with anarchists, he had robbed a bank in Vienna. Sentenced to hard labor, he escaped after four months in prison. Then he committed another robbery in a restaurant in Budapest, after which, expelled from the Austro-Hungarian Empire, he found refuge in France in 1910, at the age of 24. It should be noted that the jury did not even consider these old convictions.

Schwartzbard was undoubtedly, in his own way, always so tender toward his persecuted people, a hero of Red Cavalry, Isaac Babel’s story. But he quickly broke away – he explains this in his writings – from “the Bolshevik dictatorship of Lenin and Trotsky” that suffocated the anarchists and the workers’ councils and replaced them with “trigger-happy epigones.” And the dangerous revolutionary, back in France, was content to support an anarchist Zionist association and to be active in the League of Human Rights. It is therefore, on a double ethical and political level, incorrect, even historical malpractice, to deny the almost childlike purity of the killing he committed.

The murder, and even more so the acquittal, had a huge impact on many Jews who had fled the pogroms and were about to flee the rise of Nazism. This was not a news item, but a “founding crime”[6] which, in a way, became an example to follow. On February 4, 1936, David Frankfurter murdered Wilhelm Gustloff, an activist of the Swiss Nazi party, in Davos and was sentenced to 18 years in prison by the court in Chur. Herschel Grynszpan, on November 7, 1938, assassinated German embassy official Ernst vom Rath and was handed over by the Vichy police to the Nazis. The character was a bit off-kilter, but he too wanted to avenge his parents who had been expelled from a German town and deprived of means. His act would serve as a pretext for the outbreak of Kristallnacht. And then, of course, there was Marcel Rayman, an FTP resistance fighter of the MOI, the Immigrant Workforce, who was shot at Mont Valérien after having committed several attacks against the Occupation troops in France.

But this model of direct action also inspired emancipated intellectuals who saw in it the awakening of a new mentality, of what they called at the time a “regeneration.” Inspired by Schwartzbard’s words and writings, and nourished by the testimonies given at the trial, both Jewish and non-Jewish protests went further, sometimes with a certain anti-Jewish equivocation, by denouncing the passivity, backwardness, Torah and mores of the ghetto. And the journalist Bernard Lecache, of Ukrainian Jewish origin, on the heels of Petliura’s murder in February 1929,  founded the LICA, the League Against Antisemitism. His magazine, Le Droit de vivre, was committed to the left and called on Jews to defend themselves against “anti-Jewish excesses,” that is to say, to take illegal action: “One day,” he wrote, “I woke up a Jew, and it was because the sound of Schwartzbard’s browning had resounded in my conscience. Let us understand, where we never understand! Jewish, that is to say, freed from my insidious fears, that is to say, freed from my ‘assimilated’ prejudices. I had taken the side of my origins (…) Since the little watchmaker from Ménilmontant had accomplished what I should perhaps have accomplished, my quiet duty as an honest man placed me at his side to take, with him, the heavy and necessary responsibilities of his gesture.”[7] It should be remembered that many of the leaders of the Jewish Resistance in France were active in the LICA.

By a curious turn that homonymy seems to have played in history, another Schwarzbardt, named André Schwartz-Bart, would become known to the general public. Yiddish was his mother tongue as it was that of Samuel. He won the Goncourt Prize in 1954 for an admirable book, The Last of the Just, a hymn to the patience and gentleness that Jews have shown from age to age to their persecutors. Barely twenty years in the twentieth century separate the hundred thousand that Scholem avenged and the six million that haunted André. 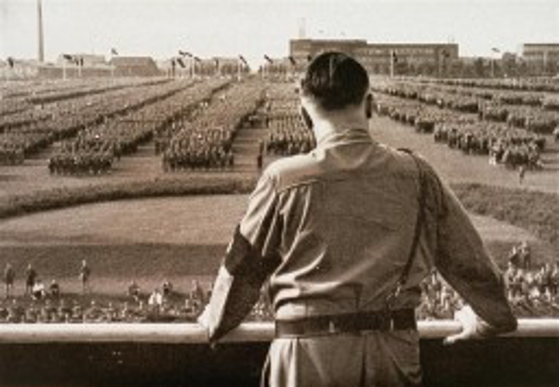 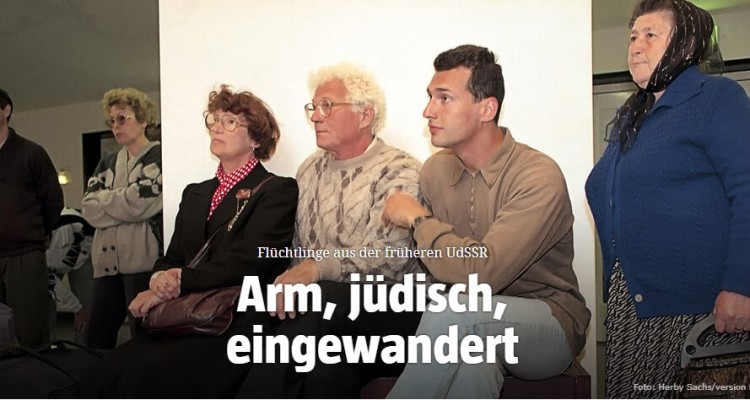 Why do Jews in Germany speak Russian? 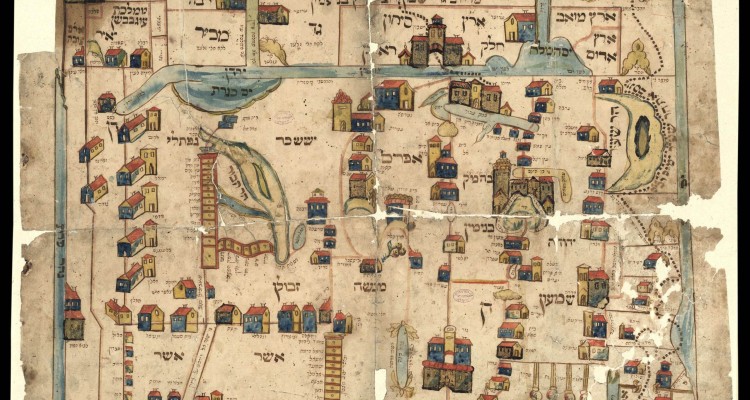 Vilna: Dream about the Vanished Jerusalem